GET ON THE WAITLIST

Dreaming of being in a show or already performing in musicals? The BROADWAY ACADEMY is designed for middle school students in grades 6-8 who thrill at the thought of performing in a musical. These SIX days of camp bring experienced guest Broadway performers to lead sessions in the triple threat areas of musical theater – acting, dancing, and singing.

Daily workshops and rehearsals will help you dig into the world of Broadway and prepare you for your next chapter as a young performer. Faculty will begin with each participant at their ability level and lead them through activities designed to appropriately stretch their skills.

No audition is necessary, although previous experience in music, dance or acting is recommended; a willingness to jump in and try in all areas is required.

Donor registration access begins at the Sponsor Level. To learn more becoming a donor, the courtesies that accompany your gift, and how we acknowledge our supporters click here.

DATES AND HOURS
One SIX-day session of SUMMER BROADWAY ACADEMY will be offered: July 10-15, 2023

Hours: Camp begins at 9 AM and ends at 4 PM (Monday-Friday) and from 9 AM until approximately 4:30 PM on Saturday. Students may be dropped off in the morning between 8:45-9 AM.  Students will be dismissed from the building between 4 PM and 4:10 PM (M-F).

Final showcase: SATURDAY at 3:00 PM.  (Details for attending/viewing the showcase will be provided later.)

Fee for the six-day BROADWAY ACADEMY is $450, which includes a daily snack; participants are asked to bring a sack lunch each day.

(Pay in full at time of registration or in four equal installments. Payment plans only available for registrations received prior to March 10, 2023.)
SCHOLARSHIPS

We want to make sure that camp is accessible to all. Please complete the online SCHOLARSHIP APPLICATION if financial assistance is needed to allow your student to participate.

TO COMPLETE THE APPLICATION FORM: You will need your contact information, average monthly household income, and a Statement of Interest (preferably written by the student, and then UPLOADED as a PDF or Word document, OR, TYPED directly into the form).

IMPORTANT: Please submit a scholarship application BEFORE registering. A spot will be held for you.

Scholarship funding is awarded based on need and time of request and is awarded on a case-by-case basis. Submitting this form does not guarantee a scholarship.

NOTE: If you attended camp last summer on a School-to-Stage scholarship after being nominated by your school, please contact Miss Lynnae at LynnaeL@DMPA.org.

EXPECTATIONS AND ATTENDANCE REQUIREMENTS
Pre-prepared Materials:
The week is designed for aspiring performers who are highly interested in musical theater. Auditions are not required to participate; however, previous training or experience is necessary. (We recommend that participants have experience in at least two of the following areas: singing, dance and acting.)Each participant is also expected to prepare a musical theater song for the week to use in coaching sessions.
Attendance Policy:
Due to the intense rehearsal schedule, participation in the showcase performance is dependent on full attendance throughout the week. Missed rehearsals may necessitate that a participant give up part or all of their role(s) for the success of the overall performance.
CANCELLATION POLICY

Your participation is very important to the overall success of your selected camp, but we understand that summer plans sometimes change. In the event that you are no longer able to participate, please submit notice of your camp cancellation to LynnaeL@DMPA.org or call 515-246-2360 to leave a message.

Questions? Please contact our summer camp coordinator Lynnae at LynnaeL@DMPA.org or leave a message at 515-246-2360.

COVID-19 POLICY AND PROCEDURES
The safety of our students and colleagues is a top priority at Des Moines Performing Arts. COVID-19 policies for summer 2023 will be set prior to camp starting based on current conditions and in accordance with local and national regulations and safety recommendations. Requirements may include masking, proof of vaccination, proof of negative test, physical distancing, or a combination thereof. By sending your student to one of our camps, you agree to abide by all communicated policies and procedures regarding COVID-19. If the COVID-19 policy is not right for your family, you will be eligible for refund.
Currently, COVID-19 policies at DMPA are adjusted on an event-by-event basis.
We appreciate your understanding and cooperation as we seek to create a healthy and meaningful environment for all camp participants. We will keep registered families informed as summer conditions come into focus.
BEFORE AND AFTER CAMP CARE

Before and After Camp Care sessions are offered for an additional $6.00 fee per session which may be added during the registration payment process.

Before care sessions open beginning at 7:30 AM; after care ends promptly at 5:30 PM.

Already registered and need to add before and after camp care? Contact LynnaeL@DMPA.org

MORE ABOUT THIS CAMP

More detailed information about THE BROADWAY ACADEMY will be emailed 3-4 weeks prior to the opening day of camp.

The BROADWAY ACADEMY is a different camp model than our Musical Theater Camp.  It is an age-adjusted version of the Broadway Intensive. Every day for six days the schedule is full of rehearsals and coaching sessions, culminating in a showcase of what was learned and rehearsed to be performed on the Civic Center stage. This is not a “kid’s camp” with art and games; it is a camp that teaches and helps students grow and develop confidence as performers through workshops and coaching.

The biggest factor for a successful BROADWAY ADADEMY experience is the willingness to give everything a try.

What do students do at camp?

The DMPA staff answers questions and gets students where they need to be, offering tips and suggestions along the way. Fellow campers offer support, cheering each other on and celebrating each new step. It is an emotional, wonderful week, where students learn about the realities of musical theater and bond in ways that can be experienced more than described.  Many students return year after year just to see their Broadway camp friends.

The Broadway Academy is an exciting, challenging experience where students can live out some of their performance dreams and ALL learn something about themselves as performers and as people.

If your preferred session is full, please add your name to our wait list by clicking HERE and indicate your student's age and which session(s) you are interested in attending. We will contact you if a space becomes available.

For questions about camp content or structure, or if needing registration assistance, contact our camp manager Lynnae at LynnaeL@DMPA.org or leave a message at 515-246-2360. 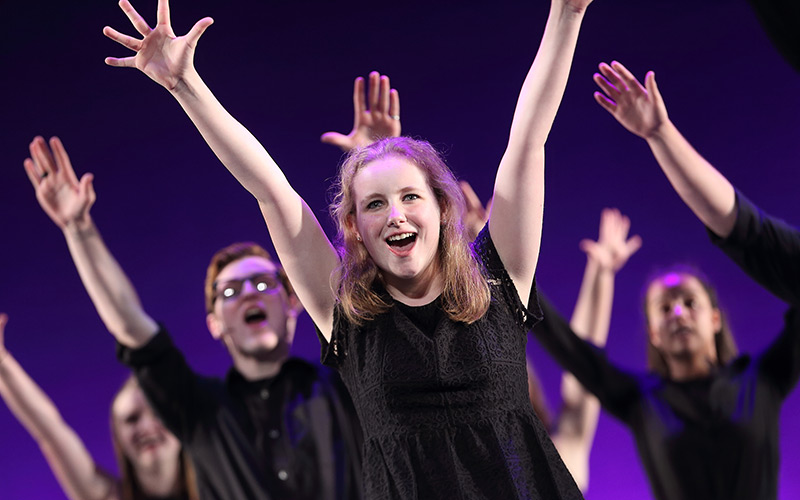