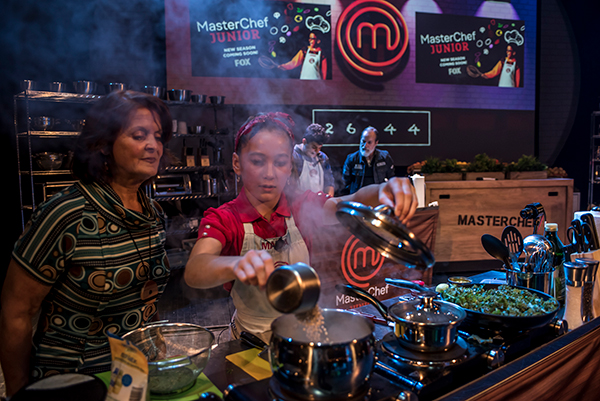 DES MOINES, IA – Des Moines Performing Arts along with TCG Entertainment, leaders in live tour productions and Endemol Shine North America, producers of the hit culinary competition series “MasterChef Junior” announce that after a successful initial 2019 tour they are extending MASTERCHEF JUNIOR LIVE! to more than 40 new markets in 2020 and the show is now coming to the Civic Center on Sunday, April 5 at 3:00 p.m. Tickets to MASTERCHEF JUNIOR LIVE! will go on sale Friday, Oct. 25, 2019 at 10 a.m. and can be purchased at DMPA.org, the Civic Center Ticket Office, or by phone at 515-246-2300.

Attended by packed audiences in 16 cities during its debut tour this fall, the extended seven-week tour will kick off in Rochester, NY on March 3, 2020 and will visit 40 additional markets across the U.S. including Boston, Brooklyn, Washington DC, Detroit, Chicago, Denver and more.

“We were thrilled that MASTERCHEF JUNIOR LIVE! was so well received by audiences of all ages in our initial run and now we are excited to expand this special theatre experience to more than 40 new U.S. markets in 2020,” said Amber Sheppo, Senior Vice President, Licensing, Endemol Shine North America. “Alongside our partners at TCG Entertainment, we are giving families and fans of our hit series a chance to meet and learn first-hand from past “MasterChef Junior” winners and contestants in cities near them.”

MASTERCHEF JUNIOR LIVE! brings “MasterChef Junior” directly to fans and foodies alike…LIVE on stage! The family-friendly show will feature head-to-head cooking demonstrations and fun (sometimes messy!) challenges with past “MasterChef Junior” contestants, and an overall immersive audience experience fun for all ages. A limited number of VIP Packages will be available in all markets and will include a premium seat, cast meet and greets, Q&A sessions, a signed show poster, photos and more!  Exclusive MASTERCHEF JUNIOR LIVE! merchandise will also be available for purchase.

MASTERCHEF JUNIOR LIVE! cast to be announced at a later date.

Come be a part of MASTERCHEF JUNIOR LIVE!  It’s an experience for the whole family and a recipe for a guaranteed good time!