FEARLESS: AN INTERVIEW WITH "IT'S NOT YOU, IT'S ME" DIRECTOR JONA 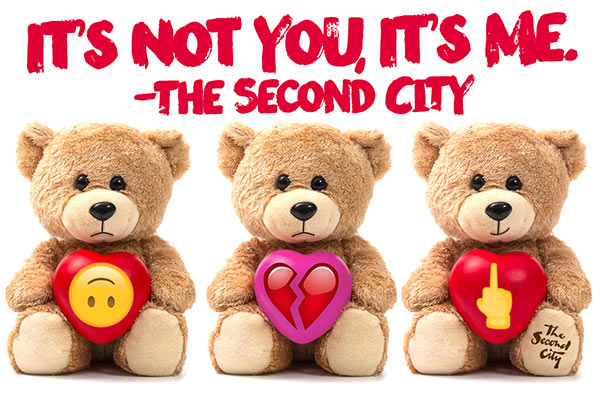 The art of taking a recipe-less scene and turning it into a delicacy for the eyes and ears — also known as “improvisation” — has been a skill that “It’s Not You, It’s Me: The Second City” director Jonald Reyes has been honing since childhood.

Fodder for what would years later become a main ingredient in his livelihood could be found as close as the family living room. Reyes recalls that his father, a typical hardnosed Chicago Bears football fanatic, was ecstatic that his team was playing in the Super Bowl one January afternoon many years ago. Console television be damned, he was going to preserve the joyous occasion — on VHS tape, of course.

“True story,” Reyes recollects with a laugh of the mental visual of that day. “It’s 1985, and there he is, connecting this unbelievably long cord to the VCR, which makes it this sort of a remote control so he can tape it. And we’re still having to walk up to the TV to change the channel with our hands to make it work. Oh, the visual of it.”

Decades later, Reyes has captured the spirit of those sprinkles of visual goodness, but this time on the stage, where he and the world-famous The Second City comedy company have teamed for a production of “It’s Not You, It’s Me: The Second City.” The production makes its way to Des Moines Performing Arts’ Temple Theater for a run of shows from April 30 to May 19.

For Reyes, who doesn’t normally travel with the touring company but will be in attendance for the first week of shows in Des Moines, The Second City comedic production is an improvisational smorgasbord.

“We have six actors who are super talented at improvisation,” he said. “We’ll start out by letting the audience know we’re making scenes up on the spot, off the tops of our heads, then go to town.”

From a quirky alphabet game in which the audience gets to jump into a car with the cast (not literally), ride along and witness hilarious, made-up-on-the-spot shenanigans, to a “day in the life” segment in which an audience member goes onstage (literally) and talks to cast members about his or her daily life, only to have it interpreted and mirrored by the cast, the show touches all worlds.

“There’s the improv saying, ‘Yes, and…,’ and I like to add on to it, explore this place that we just created and get to another level with it,” Reyes said. “I always tell my students that the best improvisers in the world are children. They believe in anything and everything, and make their make-believe world so real. There’s fearlessness. Why can’t we as adults do the same thing?”