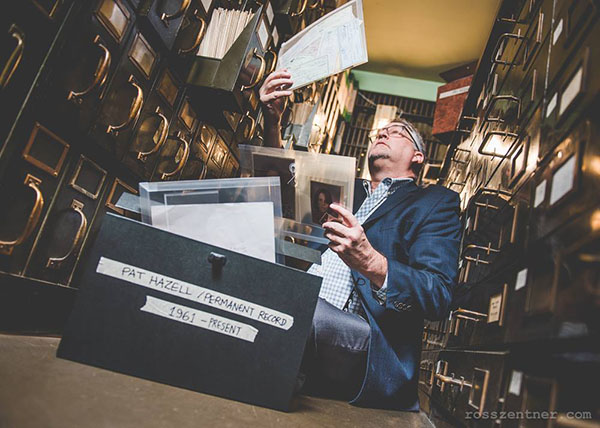 When we last touched base with comedian Pat Hazell in August, the world-class comedian and writer was carefully piecing together and planning his next project, “Permanent Record,” a night of humor, heart and humanity that takes a peek at the choices he’s made — as well as a few of yours — that will world premiere at the Temple Theater on Dec. 3 and run through Dec. 22.

Hazell has been busy putting the finishing touches on the show, but was kind enough to take time for a quick 10 Questions and give us an inside look at what we might expect.

1. What have you done since we last spoke, in this search to expose your permanent record, warts and all?
I’ve dug deeper into my records and sent out camera crews to interview people, like my mom and people I went to school with, for example. It’s been a little bit like building a case AGAINST yourself.

2. Did interviewing your mom give you any good nuggets of information that you didn’t know of previously?
My mom is a very authentic woman from Omaha. By nature she’s very complimentary of me, but then she recalls her hard labor with me, and me coming into the world tough, stories I had never heard before; it’s so honest. She tells a story about my dad saying, “You take care of the other five, I’ll fix this one.”

3. How far back did you go with regard to other people who have become part of your “permanent record”?
I found a letter from my junior high school that was sort of a warning letter, because I had had three tardies and was “on the road to ruin.” It was pretty dramatic, having been written by the vice principal. So I sent a copy of it to the interviewer, and he had her read it to the camera out loud. The funny thing was, just prior, she had said didn’t think I was EVER late to school. Then she started to read it and was like, “What? How could I be so unaware?”

4. One of our own, actor David Anthony Higgins, from West Des Moines, will be a part of the production.
David makes a voice-over during the performance to read some school announcements, which are very funny. He’s a very fun loving guy who has a lot of arrows in his quiver. Very talented.

5. What will the set design look like?
The set designer is creating what I would call a crime scene map, with pictures and documents and red lines running from one to the other to show where things went bad. There will always be images and there’s a projection area built into it so that if we need to change locations, so to speak, we can show the outside of the middle school, or the lunch ladies, or the fantasy stuff. I describe being called to the principal’s office like a long, slow walk to the electric chair. At that point, we’ll show some prison scenes. It’s fun.

6. We have our own Patrick Hazell, a well-known musician, right here in Iowa. How bizarre was it to learn of “our” Patrick, and will he be a part of “Permanent Record” in some fashion?
We actually discovered that there are 15 ADDITIONAL Pat Hazells in the U.S., who range from a cop in southern California to a bank robber in Florida. [Iowa’s] Patrick was aware of me. We had had a brief meeting a long time ago when he came to a show in Omaha and introduced himself. He actually wrote an opening theme that we are going to use, and we might use some of his songs between other themes.

7. Will there be audience participation?
There will be an anonymous station in the lobby where people can write a sentence or two on a card about something that might be on their permanent record. And they can also draw a picture of me, a stick figure or whatever, and then turn it in and get a temporary “Permanent Record” tattoo. I do a survey in the context of the show of what I call “minor violations,” like asking the audience how many of them have eaten grapes while they were grocery shopping. It’s to show that that there’s something very human about our behavior to push the envelope or think, “Well, it’s not that bad.”

9. And the worst decision?
To have a broad set of skills instead of focusing on being great at one or two things. I dabbled across the board, and it’s been fun and diverse and a lot of variety, but it means that I’m left running my own race against the clock. What I might be doing with “Permanent Record” is proving that I AM great at one thing: being a bad example.

10. The night will be filled with laughs and revelry, but it sounds like there’s sort of positive message embedded in this, too.
People seem to be chasing after happiness, but in writing this piece, I’m realizing that happiness doesn’t run away, it waits for you to come back. The reality is that you have much control of it than you think you might.